We believe that everybody deserves clean water and that solving the water crisis should not create an environmental crisis.

Read our news
See our pictures

Waterfountain 10 is an unmanned, modularized desalination system that can store up to 30 m³ and produce up to 100 m³ per day 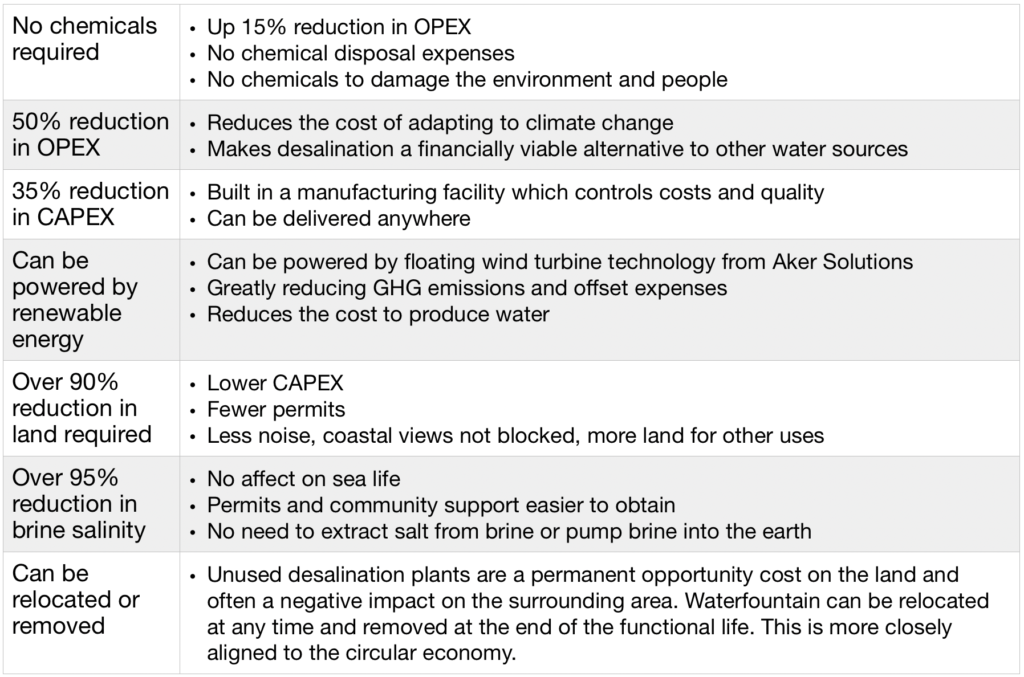 Tor’s engineering career focused on ensuring contracted offshore-rigs in Europe, Asia, Middle East and Africa exceeded customers expectations.  He was responsible for service contracts, addressing all warranty claims, operating contracts and sales of offshore drilling rig equipment and services.  Most recently, he was responsible for all aspects of developing the design and functionality of rig systems.  In his younger days he worked hands-on for over a decade in offshore operations in the extreme conditions of the north sea.  He served his duty in the Royal Norwegian Navy as a diver and officer.  He later earned his engineering degree focused on marine engineering at Vestfold University College.  Growing up on a farm in the Sami region of Northern Norway gave him the backbone of values he believes firmly in.  His slogan is, “Nothing is impossible, the impossible just takes a little more time and requires more people to work together as one”.  Tor is always thinking of ways to improve the Waterfountain; even while working on one of his project cars; or so he says.  Tor lives in Søgne, a small seaside village in Southern Norway with his partner and six year old son.

Rolf comes from the offshore industry where he developed the mechanics and hydraulics of heave compensators.  The distance between an oil rig and the seabed changes constantly due to the rise and fall of the surface level of the ocean.  To accommodate for this, Rolf designed gas/fluid driven hydraulic compensators capable of stretching up to 50 feet; allowing drilling risers weighing up to 1000 tons to maintain stability.  One of these systems was patented with the title “riser system for a slacked moored hull floating unit”.  He also played a key role in an innovation team responsible for inventing and securing patents for a “sea fastening apparatus for a tensioner assembly”.  Most recently Rolf supervised a team in Brazil responsible for the production of pipe and riser handling equipment.  He earned his mechanical engineering degree from Vestfold University College with a focus on design and new product development.  Today he spends most of his time refining the Waterfountain desalination system using 3-D modeling software and flow calculations.  He lives in a small town in Eastern Norway with his wife.  Rolf often travels to the workshop in Southern Norway and can’t wait to make the trip in his vintage Camaro.

Kyle’s professional and academic background is in international business administration.  He began his career as a business analyst at Oracle, managing partner relationships.  As an employee of an environmental remediation company he built and led a human resources department developing systems while rapidly hiring over 100 specialists.  Later he was responsible for mitigating risks associated with extremely low altitude rotary wing flight and experimental flight operations.  He also developed financial proposals and managed costs for numerous US government funded projects.  Kyle has over ten years experience as a business consultant in Asia and USA focused on implementing pricing and cost management systems.  Additionally, he has delivered business and communications skills training in over fifty workshops.  As an expatriate youth in Indonesia, Kyle owned and operated a sporting goods business and was a television sports commentator.  He earned his Asia and business focused bachelors degree from the University of Oregon and while consulting in Vietnam, he earned his MBA from the University of Hawaiʻi.  Kyle and his two children are preparing to move to Norway from their family farm in Iowa.

Let's do this together